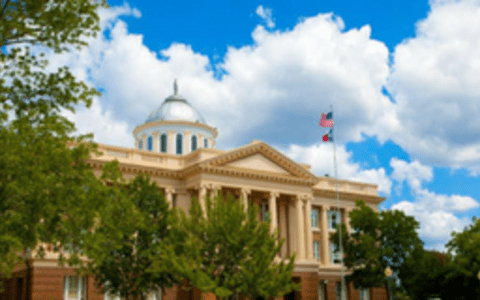 Details Likes 1
Built in 1914 the Anderson County Courthouse, features beaux-arts architecture with a double-spiral staircase and a beautiful stained glass montage in the dome. Open to the public.

The Courthouse Square is the highest site in the area. The silver dome of the fourth and current Anderson County courthouse can be seen for miles at many points surrounding the city. The first sessions of court were held outdoors, underneath the boughs of oak trees in July, 1846.
The first courthouse was completed in May, 1847 as a one-story, timber frame building with wood siding that measured 20 X 32 X 10 feet high just off the current Courthouse site. The building was sold in 1853 for $4,806 to be used as a general store when the new brick courthouse on the square was completed.

The second courthouse was constructed by O.C. Terrell using brick from his factory, probably around 1854, for the sum of $6000. It was a two story building with Greek revival styling including a windowed wooden copula in the center of the roof that may have been used to watch for steamboat activity on the Trinity River. This building fell into disrepair after thirty years and was demolished in http://1885.This building had seen the court of John H. Reagan, Palestine’s First Citizen, the Civil War and the dastardly doings of the carpet-baggers who looted the citizens during reconstruction. Finally, it saw the coming of the railroad to Palestine in 1872.

The third courthouse was an elaborate Italianate of brick, limestone and wood, standing three stories tall with a central red brick tower that rose an additional three stories. This impressive building was completed in 1886 at a cost of $40,000. It was destroyed by arson in 1913 by two burglars attempting to destroy evidence. Ironically, the evidence survived in fireproof vaults in the basement.

The fourth and current courthouse was built of brick and limestone in the Classical Revival style and completed in 1914 for $150,000. It appears to be square, but this is an optical illusion. The east and west faces are longer. It features beaux-arts architecture with a double-spiral staircase and a beautiful stained glass montage in the dome as well as a special beautiful design in the marble basement floor. It underwent restoration in 1986 and is a National Historical Landmark.